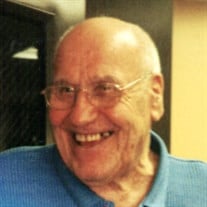 Clayton, Mr. Alfred J., Saginaw, Michigan Our beloved father, grandfather, brother and uncle passed away on Saturday, June 14, 2014, at Covenant-Harrison. Age 88 years. Al was born on February 5, 1926, in Merrill, MI, to the late James and Anna (Chaplar) Clayton. He was first married to Doris (Dice) Vasold. She predeceased him on December 20, 1985. He then married Bessie M. (Drouillard) Riska Reinert on June 18, 1988, and she predeceased him on August 2, 2007. Pvt. Clayton served in the U. S. Army during WWII in the 82nd Airborne. As a paratrooper, he received 2-Battle Stars for his war-time service in France. Prior to his retirement, he was employed as a cement mason with Wobig Construction for 42 years. Surviving are his three brothers, Leo (Carla) Clayton, Edward Clayton and Paul Clayton; three step-children, Jerry (Betty) Vasold, Susan (Gary) Reid, Joann (Dane) Morse; five step-grandchildren, Megan Reid, Jay Vasold, Mechelle (Steve) Baardson, Sheree Vasold, Aaron (Brandi) Vasold; several nieces and nephews; a special friend, Aggie Stachowicz; also an exchange student he had kept in contact with, Karl (Renata) Feiussner of Germany. He was predeceased by his sister, Mary Bluemer and two brothers, George and Rolf Clayton. In accordance with Al’s wishes, cremation has taken place and his inurnment will be in Chapel Hill Mausoleum in Freeland at a later date. Al’s memorial service will be held 11:00 a.m. at Zion Lutheran Church in Freeland, on Thursday, June 19, 2014. Pastor Robert G. Schmidt will officiate. Friends are welcome to visit with the family at the church on Thursday from 10:00 a.m. until the time of his service. Military honor guard will be conducted under the auspices of V.F.W. Post#1859, Carrollton/Zilwaukee. Memorials may be given to Zion Lutheran Church, Freeland. Memories and sympathies of Alfred Clayton may be shared with the family on his memorial website at WakemanFuneralHome.com

The family of Alfred J. Clayton created this Life Tributes page to make it easy to share your memories.

Send flowers to the Clayton family.