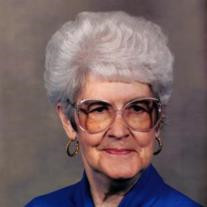 Holec, Mrs. Alice A. (Mayforth), of Saginaw, Michigan passed away Friday, August 20, 2011, at Covenant Emergency Care Center. Age 90 years. She was born on September 18, 1920, in Saginaw, daughter to the late Henry and Martha (Born) Meyforth. She was married to John M. Holec on September 20, 1947, in Saginaw. He predeceased her on November 22, 1980. Prior to her retirement, Alice had been employed at Lufkin Rule for seven years until her marriage. Then she and John moved to Flint and worked at Fisher Body and Ternstead until her retirement. She moved back to Saginaw five years after John’s death. She was a member of Peace Lutheran Church and a resident of McBrite Manor. She is survived by one niece and two nephews, Sharon Hahn; Kenneth Weigold and Lawrence Weigold, also several great-nieces and great-nephews. Alice was predeceased by one sister, Lena Weigold, two nieces, Arlene Weigold and Janet Ebel, also one nephew, Gerald Weigold. The family wishes to express their thanks to McBrite Manor, also Ruth and Carlton Wodtke for their loving care and thoughtfulness given to Alice. Funeral service will take place 11:00 a.m., Thursday, August 25, 2011, at Peace Lutheran Church, 3427 Adams. The Rev. C. William Weis will officiate with burial in Holy Cross Lutheran Cemetery. Friends are welcome to visit with the family at the Wakeman Funeral Home, Inc., 1218 N. Michigan Ave. on Wednesday from 2:00 – 8: 00 p.m., then at the church on Thursday from 10:00 a.m. until the time of service. Memorial contributions may be given to Peace Lutheran Church. Memories and sympathies of Alice may be shared with the family on her Obituary page at www.WakemanFuneralHome.com

The family of Mrs. Alice A. (Meyforth) Holec created this Life Tributes page to make it easy to share your memories.

Send flowers to the Holec family.