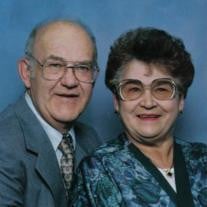 Rasche, Alvin L., of Saginaw, Michigan passed away Wednesday, June 13, 2012, at Tendercare of Rogers City. Age 73 years. Alvin was born on December 4, 1938, in Metz Twp., Presque Isle Co., MI. He married Alice E. Grulke on August 3, 1957, in Hawks, MI. She predeceased him on April 24, 2011. Alvin served in the U. S. Army, during the post Korean war era. Prior to his retirement, he was employed as a plumber and pipefitter for Johnson Controls for 20 years and an instructor at Delta College. He was a member of Plumbers and Pipefitters Union Local #85 and former member of Holy Cross Lutheran Church. Alvin was an avid outdoorsman, and loved building and tinkering with all types of things. He is survived by two sons, Roger Rasche and Eugene (Barbara) Rasche; four grandchildren, Katie, Karl, Kayla Rasche, and Ranger Rasche; three great-grandchildren; and his mother, Leona (Fleming) Rasche. He was predeceased by his father, Alfred Rasche and a son, Ronald Rasche. Funeral service will take place 11:00 a.m. Tuesday, June 19, 2012, at the Wakeman Funeral Home, Inc., 1218 N. Michigan Ave. The Rev. Douglas W. Kahl will officiate with burial in Oakwood Cemetery. Friends are welcome to visit with the family at the Wakeman Funeral Home, Inc. on Monday from 10:00 a.m. – 1:00 p.m. and 3:00 p.m. – 7:00 p.m., then on Tuesday from 10:00 a.m. until the time of service. Memories and sympathies of Alvin may be shared with the family on his Obituary page at WakemanFuneralHome.com

The family of Mr. Alvin L. Rasche created this Life Tributes page to make it easy to share your memories.

Send flowers to the Rasche family.