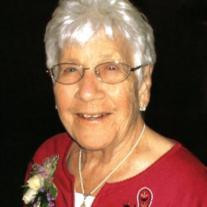 Nicklyn, Mrs. Alvina (Rohn), of Saginaw Twp., Michigan, passed away at home on Tuesday, April 12, 2011, surrounded by her loving family. Age 93 years. Alvina was born on April 3, 1918, in Saint Paul, MN to the late Christian and Eva (Gies) Rohn. She was married to John Nicklyn, a prominent builder and developer in Saginaw Twp., on August 21, 1937, in Saginaw, where he predeceased her on June 21, 1985. Alvina was a lifelong member of Holy Cross Lutheran Church. She was employed at the Saginaw Gun Plant during WWII. Surviving are six children and their spouses, Jack (Judy) Nicklyn, Carl (Sandy) Nicklyn, Richard Nicklyn, James (Cindy) Nicklyn, Dennis (Pam) Nicklyn, and Joseph (Earla) Nicklyn; 12 grandchildren; 21 great-grandchildren; three great-great-grandchildren; one sister, Molly Huntley, and many nieces and nephews. She was predeceased by a son, Robert James Nicklyn, and two brothers and three sisters. Alvina was a loving mother and grandmother and will be missed by everyone who knew her. Funeral service will take place 11:00 a.m. Friday, April 15, 2011, at the Wakeman Funeral Home, Inc., 1218 N. Michigan Ave. The Rev. James F. Krueger will officiate with burial in Holy Cross Lutheran Cemetery. Friends are welcome to visit with the family at the Wakeman Funeral Home, Inc. on Thursday from 3:00 – 8: 00 p.m., then on Friday from 10:00 a.m. until the time of the service. Memorials may be given to Holy Cross Lutheran Church. Memories and sympathies of Alvina may be shared with the family on her Obituary page at www.WakemanFuneralHome.com

The family of Mrs. Alvina Nicklyn created this Life Tributes page to make it easy to share your memories.

Send flowers to the Nicklyn family.