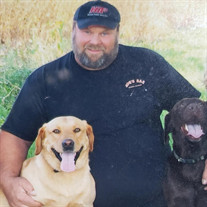 Hart, Bernard V. (Bernie) James Twp., Saginaw, Michigan Born on November 4, 1957, Saginaw, Michigan, Bernie passed away after two years of declining health, at his James Township home, Sunday, May 17, 2020, at age 62. His late parents were Bernard C. and Mary Ruth (Ozerites) Hart. Bernie attended Carr School as a child and went on to be a part of the first graduating class of Swan Valley High School. During his High School career he was a member of the football team and brought home a State Wrestling title. He left Saginaw to travel west during the 1970’s with the skilled trades crews building nuclear reactors. Bernie returned briefly to Saginaw before moving to Florida until the 1990’s when he came back to Michigan and family in Saginaw. Bernie lived with his dogs, an unlocked door, and a kind heart under a gruff manner. Bernie showed his special talent as a mechanical prodigy at two years old, when he proposed a fix for a beet harvester that seemed hopeless to repair. From that time on, he seemed to see the answers and find the solutions to problems that stopped people in their tracks. He regularly cooked for benefits and fund raisers, delivered garden produce to the Rescue Mission and soup kitchens; or anyone willing to feed someone down on their luck. He married Amy Burns, May 28, 2001. Together they motorcycled, canned, gardened, cooked, traveled, and made good times together. Bernie will be missed greatly by his nephew, Mike Hart, who Bernie kept close at his side for most of the last years. His nieces Katie Wood (Mike), Beth Hart and nephew Jeffery Hart (LeAnne) made his life bearable in these past years of struggle. Left to continue without their brother are Harry (Betty) and Dan (Sue) Hart and Bernie’s sisters, Dorothy Wilson and Mary Anne (Dennis) Henning. Other nieces and nephews affected by his passing are Robert Coon, Alana Coon, Peter Henning, Harry and Harold Hart, Jake and Brooke Hart, Alex Schauman and Tyler Wood. He was predeceased by his Mother, Father, Brother Charlie Hart, and brother-in-law, Larry Wilson. Cremation has taken place according to Bernie’s wishes. Other plans for his farewell are delayed until we can gather as family and friends. Memorial gifts will be directed to a funeral fund. Bernie had a rich and colorful life. Any special memories or stories would be a welcome comfort to family and friends. Laughter is the best medicine. Those wishing to express their love, sympathies and memories of Bernie may share them with the family on his memorial website at WakemanFuneralHome.com

The family of Bernard (Bernie) Hart created this Life Tributes page to make it easy to share your memories.

Send flowers to the Hart family.