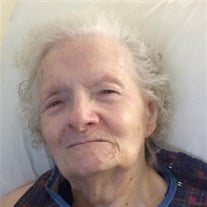 Bernice Esther (Hass) Vega was called home to be with her Lord on Sunday, January 6, 2019, from Serenity Springs in Saginaw. She was born on January 9, 1927, in Detroit, MI, to the late Fred and Martha (Zilz) Hass. Bernice married Henry John Vega on September 18, 1948, in Unionville, Michigan. He predeceased her this past October. Prior to his passing they had celebrated 70 years of marriage. Their marriage was blessed with five children; Deborah (Jim) Meyer, Patricia (Ferris) Finerty, Brian Vega, Carol Vega, and Elisa (David) Solak; many grandchildren, great-grandchildren and great-great-grandchildren. She was also predeceased by her sisters, Loretta (Hass) Baker, Mildred (Hass) Witek and Eileen (Hass) (Hoppe) Krug. Bernice entered nursing school at Harper Hospital School of Nursing immediately upon completing high school. While still in training, she was a member of the Cadet Nursing Corps. She worked at the Aleda E. Lutz Medical Center - Veteran’s Administration Hospital in Saginaw, MI, St. Joseph Hospital in Ypsilanti, MI, and St. Luke’s Hospital in Saginaw, MI. At the time of her retirement, she had earned certification as an operating room nurse. Bernice, who always expressed that it was more sanitary to give a hug than to shake hands, was known for her warm hugs to family, friends, and strangers alike. All who knew her looked forward to getting one of her hugs. Her compassion and caring earned her the first annual “Hands and Heart” award given to her by the Aleda Lutz Medical Center - Veteran’s Administration. This award was given for “the most to exercise professional expertise in providing emotional support, help and guidance to patients”. She attended Faith Lutheran Church in Bridgeport until retiring to Traverse City, Michigan. Bernice and Henry then became members of Redeemer Lutheran Church in Interlochen, Michigan. She faithfully served her Lord on the Lutheran Women’s Missionary League, Stephen Ministry and donated many hours of service in other areas at both churches. Both she and Henry enjoyed the many mixed doubles bowling leagues they were on. Bernice loved to garden throughout her life and was a member of the Interlochen Garden Club in Interlochen, Michigan. After retiring she enjoyed swim aerobics in Traverse City. Both she and Henry loved to travel and explored the eastern seaboard prior to the birth of their first child. After retirement they spent many hours driving around the country to visiting popular sites and family in the lower forty-eight; including Arizona, Florida, Wisconsin, South Dakota and all states in between. Their travels also took them to Alaska visiting Denali National Park and many other places while spending time with Bernice’s niece and her husband. Bernice’s funeral and committal will be held 11:00 a.m., Saturday, January 12, 2019, at Faith Lutheran Church, 4241 Williamson, Bridgeport, MI. The Rev. Timothy Behnke will officiate. Friends are welcome to visit with the family at the Wakeman Funeral Home, Inc., 1218 N. Michigan Ave., Saginaw, MI, on Friday from 4:00 pm. to 8:00 p.m., then at the church on Saturday from 10:00 a.m. until the time of her services. In accordance with Bernice’s wishes, cremation will follow. Memorial contributions are suggested to Faith Lutheran Church, Bridgeport. Memories and sympathies of Bernice may be shared with the family on her memorial website at WakemanFuneralHome.com

Bernice Esther (Hass) Vega was called home to be with her Lord on Sunday, January 6, 2019, from Serenity Springs in Saginaw. She was born on January 9, 1927, in Detroit, MI, to the late Fred and Martha (Zilz) Hass. Bernice married Henry John... View Obituary & Service Information

The family of Mrs. Bernice E. Vega created this Life Tributes page to make it easy to share your memories.

Bernice Esther (Hass) Vega was called home to be with her Lord...

Send flowers to the Vega family.