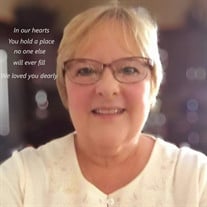 Mrs. Deborah L. Albrough Bay City, Michigan A loving wife, mother, sister, aunt and friend passed away on Monday, December 27, 2021, at McLaren Bay Region Medical Center at 68 years old. Deborah Lee (Smith) Albrough was born on August 13, 1953, in Sault Ste. Marie, Michigan to the late Richard N. And Sally L. (Sullivan) Smith Miller. She was married to David F. Albrough on July 13, 1974, and he survives her. She is also survived by her son Jason D. (Beth) Albrough, sister, Suzanne (Gary) Jones, sister-in-law, Leanne (Davis) MacDonald, and niece, Jenna S. Jones, special cousins, Beverly (Jim) Atkins and Linda (Mark) Ziewacz. She was predeceased by her mother, Sally Smith Miller, step-father, Douglas L. Miller, father, Richard N. Smith, brother, Richard Clare Smith, nephew, Scott R. Jones and father and mother-in-law, Frank and Lillian Albrough. Prior to her retirement in June 2014, Deb was employed as a Secretary for Health and Human Services at Saginaw Valley State University for 26 years. In the fall of 2016, they moved to Florida, where she enjoyed time with friends, line dancing, “Girls Night Out” and many other social events in her community. In November 2021, they relocated back to Michigan to be close to family. In accordance with family wishes, cremation will take place. The family will be planning a memorial for Deb in late spring 2022, where she will be laid to rest at Oaklawn Chapel Gardens in Sault Ste. Marie, Michigan. Memories and sympathies for Deb may be shared with the family on her memorial website at WakemanFuneralHome.com

The family of Mrs. Deborah L. Albrough created this Life Tributes page to make it easy to share your memories.

Send flowers to the Albrough family.