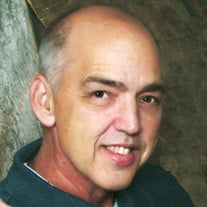 Schluckbier, Dennis A., Sr. St. Charles, Michigan Beloved husband, father, grandfather and friend passed away suddenly on Saturday, May 13, 2017, at Covenant Harrison. Age 62 years. Dennis was born December 25, 1954 in Saginaw, to the late Frederick J. and Evelyn A. (Buchinger) Schluckbier. He graduated from Arthur Hill High School in Saginaw in 1973, and later with a business degree from Delta College. He married Cindy Cramer on August 9, 1975. She survives him. Together they had three children, Amy (Dale) Gross of Lansing, Becky (Adam) Avila of Saginaw and Dennis Jr. of Saginaw. He also leaves four grandchildren, Ava and Elijah Gross, and Ellianna and Gracie Avila; one brother and one sister, Dale (Lorraine) Schluckbier of Florida, Karen Friebe, Kawkawlin; a brother-in-law, Lowell Friebe, Kawkawlin; and many nieces, nephews, cousins and other in-laws. He was predeceased by one sister, Joyce Friebe, and two brothers-in-law, Lloyd Friebe and John Cramer. Family was always of utmost importance to Dennis and he enjoyed his time with his children and grandchildren above and beyond everything else. Dennis was also an avid fan of the Detroit Lions and enjoyed attending games, or watching them nearly every Sunday with family and friends. Dennis began his career as a co-op student at Hayes Specialties Corp in Saginaw in 1971, working his way up to eventually being company president and part owner. He was a mentor to many in the company, as well as loved by countless customers and suppliers he'd met in his 46 years with the company. Funeral service will take place 11:00 a.m. Saturday, May 20, 2017, at Bethlehem Lutheran Church, 808 Weiss St. The Rev. Michael R. Korte will officiate. Private burial in Roselawn Memorial Gardens. Friends are welcome to visit with the family at Wakeman Funeral Home, Inc., 1218 N. Michigan Ave., Saginaw, on Friday from 2:00 to 8:00 p.m., then at the church on Saturday from 10:00 a.m. until the time of service. Memorial contributions may be given to his wife, Cindy, to be placed into his grandchildren’s 529 College Savings Plans. Memories and sympathies of Dennis may be shared with the family on his memorial website at WakemanFuneralHome.com

The family of Dennis A. Schluckbier Sr. created this Life Tributes page to make it easy to share your memories.

Send flowers to the Schluckbier family.