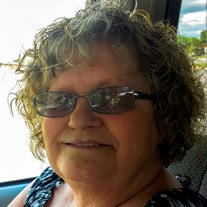 Brethauer, Diane M., Saint Helen, MI, Formerly from Saginaw Passed away unexpectedly Friday, June 12, 2015, at her home. Age 61 years. Diane Marie Fear was born on February 14, 1954, in Saginaw, to the late George and Luciel (Cornell) Fear. She married Edwin G. Brethauer on October 30, 1992, and he preceeded her in death on March 9, 2013. For many years Diane worked in healthcare as a CNA at Saginaw Geriatrics Home. She will be reunited with her brothers, James and Don Fear, her sister-in-law, Shelby Brethauer, and her niece, Rosemary Durek. Surviving are her son, William J. and his wife, Angela; four grandchildren, Nicolle (Chris), Jacob, Angel, and Grace Brethauer; her brothers-in-law, Duane (Nancy), Robert, Bill (Marie) Brethauer; and her sister-in-law, Marylouise (Robert) Durek; as well as many wonderful nieces, nephews and life long friends. Diane's Memorial Luncheon will be held at 2:00 pm Sunday, June 28, 2015 at Robin Glen Clubhouse, 5720 E. Washington Rd., in Buena Vista Twp. on M-81. Memories and sympathies may be shared with the family on Diane's Memorial Website at www.WakemanFuneralHome.com

The family of Diane M. Brethauer created this Life Tributes page to make it easy to share your memories.

Send flowers to the Brethauer family.