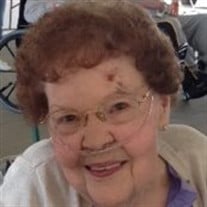 Maul, Mrs. Dorothy (Wilson) Saginaw, Michigan Dorothy passed away Monday morning, June 2, 2014, at the Hoyt Nursing and Rehab Centre. Age 90 years. Dorothy Wilson was born on November 6, 1923, in Mt. Forest Twp., Pinconning, MI, to the late Raymond and Emma (Denny) Wilson. She was first married to Kenneth Knochel; she then was married to David Maul and he predeceased her. Back in the day, Dorothy had worked at Mercy Hospital as a Nurse’s Aide and then she worked in assembly at Dow Chemical for a few years. Dorothy is survived by two of her daughters, Janet [Knochel] and Jim Weadbrock, Ashburn, VA; Devra [Maul] Byron, Bay City; step-son, Jim Maul; son-in-law, Larry Nachtweih; nine grandchildren; 16 great-grandchildren; also several nieces, nephews, cousins, and dear friends. Dorothy was predeceased by her parents, husband, son-in-law, Scott Byron, and her daughter, Sheryl R. Nachtweih, also three brothers. In accordance with Dorothy’s wishes, cremation has taken place and no services will be held. Memories and sympathies of Dorothy may be shared with the family on her memorial website at WakemanFuneralHome.com

The family of Mrs. Dorothy M. Maul created this Life Tributes page to make it easy to share your memories.

Send flowers to the Maul family.