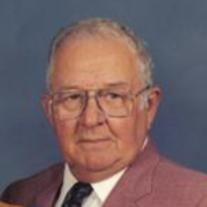 Frick, Mr. Ernest R., of Saginaw, Michigan, passed away Tuesday, April 10, 2012, at Luther Manor. Ernest was born on July 6, 1920, in Mt. Pleasant, Michigan to the late Robert M. and Edith E. (Herdlein) Frick. Ernest was married to Elva M. Brown on August 13, 1938, in Angola, IN. He was co-owner of Pioneer Lodge in Ontario, Canada. He was also employed at A.T. Ferrell and Beech Hollow Golf Course for many years. He was a member of Holy Cross Lutheran Church and the L.F.A. Surviving besides his wife, Elva, is one son, one daughter and their spouses, Marty (Carole) Frick, Hale; Ruth (Glen) Berkobien, Saginaw; six grandchildren, Sheila Rector, Brian Berkobien, Aaron Frick, Heidi McKenney, Scott Wilson, Betsy Rezler; 10 great-grandchildren; and several nieces and nephews. He was predeceased by a brother, Edward Frick and a sister, Louise Tripple. Funeral service will take place 11:00 a.m. Friday, April 13, 2012, at Holy Cross Lutheran Church, 600 Court St. The Rev. James F. Krueger will officiate with entombment in Roselawn Memorial Gardens Mausoleum. Friends are welcome to visit with the family at the Wakeman Funeral Home, Inc, 1218 N. Michigan Ave., on Thursday from 4:00 to 8:00 p.m., and then on Friday from 10:00 a.m. until the time of service. Memorials may be given to Holy Cross Lutheran Church. Memories and sympathies of Ernest may be shared with the family on his Obituary page at WakemanFuneralHome.com

The family of Mr. Ernest R. Frick created this Life Tributes page to make it easy to share your memories.

Send flowers to the Frick family.