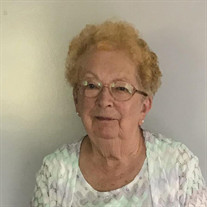 Fechter, Mrs. Eunice E., Saginaw, Michigan. Eunice Edna (Lee) Fechter was called home to her Lord on Monday, April 20, 2020, at Covenant Medical Center – Cooper Campus, at the age of 90 years. She was born on August 15, 1929, in Saginaw, Michigan, to the late James and Charlotte (Simcox) Lee. Eunice was married to Clark O. Fechter on October 18, 1952, in Saginaw, and he predeceased her on June 29, 2006. She originally had been a member of Redeemer Lutheran Church, then became a member with Messiah Lutheran Church. Prior to her retirement, Eunice was employed as a secretary with the Buena Vista School District. Surviving are her children, Sara Fechter, Saginaw, MI; Gretchen (Drew) Flemming, Grand Rapids, MI; Clark Fechter Jr., Wawautosa, WI; grandchildren, Kara and Chris Posthumus , Danny Flemming and Kellee and Liam Donovan ; great grandchildren, Harper and Calvin Posthumus and Miles Donovan; many nieces, nephews, great-nieces and great-nephews, extended family and dear friends. She was also predeceased by her brothers and their wives, Sydney (Ardis) Lee and Larry (Catherine) Lee. Due to the current health situation and attendance limitations, Eunice will be laid to rest in Pine Grove Cemetery, Bridgeport Twp., Michigan, with a private family committal. The Celebration of Eunice’s Life will be held at a later date. Memorial contributions may be given to Messiah Lutheran Church, Autism Society of Michigan, or Cystic Fibrosis Society. Memories and sympathies of Eunice may be shared with the family on her memorial website at WakemanFuneralHome.com

The family of Mrs. Eunice E. Fechter created this Life Tributes page to make it easy to share your memories.

Send flowers to the Fechter family.