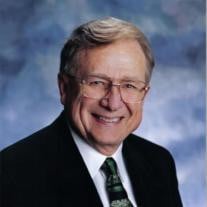 Kluck, Mr. Gerald (Jerry), of Thomas Twp., Michigan. Jerry, who spent his life caring for God’s creation on earth, was welcomed into the arms of his loving Savior in Heaven on Tuesday, September 25, 2012. Age 82 years. He was known for his warm smile, devotion to his Savior and family, and compassion for all people. Because of this, Jerry’s life was filled with service to his church, profession and community. Jerry was born on February 26, 1930, in Saginaw to the late Walter and Frieda (Zorn) Kluck. On August 23, 1952, he married Sally Sorgatz, his beloved wife of sixty years. She survives him. Jerry’s work began at his parent’s farm, Kluck Nursery. Along with his brother, Edward, and son Tom, they owned and operated the business. Jerry retired in 1999. He was a life-long and faithful member of Holy Cross Lutheran Church. Surviving besides his wife, Sally, are their three children and their spouses, Judy (Tom) Resler, Linda (Alan) Nuechterlein, all of Frankenmuth; Thomas (Karen) Kluck, Thomas Twp., seven grandchildren, Brooke (Justin) Finkbeiner, Jamie Resler, Micah, Eric (fiancée Sarah Suminski), Jake Nuechterlein, Tyler and Karina Kluck; three great-grandchildren, Trace, Brady, and Eli Finkbeiner, with another one expected in March; brothers and sister, Edward Kluck, Saginaw; Eleanore Schaper, Royal Oak, MI, and twin brother, Harold Kluck, Saginaw; sister-in-law, Nancy Wintermeyer, brother-in-law and sister-in-law, Jim and Marian Sorgatz; also many special nieces, nephews, loving friends and employees. Jerry was predeceased by father-in-law and mother-in-law, Frank and Ruth Sorgatz, sister-in-law, Ruth Kluck, brothers-in-law, Jack Schaper and Howard Wintermeyer. The Celebration of Jerry’s Life will be held at 3:00 p.m., Sunday, September 30, 2012, at Holy Cross Lutheran Church, 600 Court St., Saginaw. The Rev. James F. Krueger will officiate with burial in Holy Cross Lutheran Cemetery. Friends are welcome to visit with the family at Holy Cross Lutheran Church on Friday from 5:00 to 8:00 p.m., Saturday from 10:00 a.m. to 1:00 p.m. and 2:00 p.m. to 6:00 p.m., then on Sunday from 2:00 p.m. until the time of service. Memorial contributions may be given to Jerry’s beloved Holy Cross Lutheran Church. Memories and sympathies of Jerry may be shared with the family on his memorial website at WakemanFuneralHome.com

Kluck, Mr. Gerald (Jerry), of Thomas Twp., Michigan. Jerry, who spent his life caring for God’s creation on earth, was welcomed into the arms of his loving Savior in Heaven on Tuesday, September 25, 2012. Age 82 years. He was known for... View Obituary & Service Information

The family of Mr. Gerald F. Kluck created this Life Tributes page to make it easy to share your memories.

Send flowers to the Kluck family.