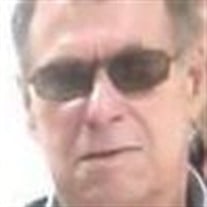 Henry J. Brewster, Jr. Burt, Michigan Beloved husband, father, grandfather and great-grandfather fulfilled his work here and has earned his place in Heaven. He worked hard his entire life to support his wife and family. Always lending a hand to anyone who needed it. Never refused anyone. He loved the sport of baseball. Not only did he play for many years, he was also a dedicated coach for many years. He also enjoyed fishing, horseshoes and always had the best euchre hand. He also loved his music and jamming with his grandkids, the many jokes and talking like Donald Duck. Life without him will be hard, but the one thing he taught us all was to live. We will miss him dearly until the day we are reunited. Until then, he will always just be a heartbeat and a memory away. Prior to his retirement, Henry worked as an assistant manager for Vescio’s Grocery Store, and he had also worked for Industrial Coating. Henry passed away on Saturday, May 23, 2020, at Covenant Medical Center – Cooper. He was 77 years old. Henry Joseph Brewster, Jr. was born on June 28, 1942, in Flint, Michigan, to the late Henry Joseph Brewster, Sr. and Irene Emma (Elsinger) Brewster. He was married to Roberta Byers on November 2, 1963, in Flint, Michigan, and she survives him. He is also survived by his children and their spouses, Henry J. Brewster, III, Jacqueline (Dennis) Anklam, Larry (Rose) Brewster, Deborah Brewster; his grandchildren, Nikki, Godrick Vess, Tonia, Anthony, Brienna; his great-grandchildren, Savanna, Ashton, Amelia, Levi, Colt and Lyla; his siblings, Mary (Earl) Urbanke, Rhonda Becker, Craig Brewster, Vickie Goddard, Derrick (Marion) Brewster, Wayde Brewster, Danae Brewster, Wayne (Peggy) Brewster; sisters-in-law, Mary Margaret Brewster and Julie Brewster; many nieces and nephews; and good friend Denny Peters. Henry was also predeceased by his daughter, Patricia A. Brewster; his parents, Henry and Irene Brewster, Sr.; his brothers, Gene Brewster, Lance Brewster; his sister, Debra Brewster; and his brother-in-law, Dennis Goddard. In accordance with Henry’s wishes, cremation will take place. The family will be planning a celebration memorial in memory of Henry at a later date. Memorial contributions may be directed to Roberta. Those wishing to express their love, sympathies and memories of Henry may share them with the family on his memorial website at WakemanFuneralHome.com

The family of Henry J. Brewster Jr. created this Life Tributes page to make it easy to share your memories.

Send flowers to the Brewster family.