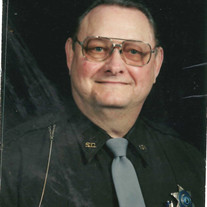 DIFFIN, MR. JAMES E. Saginaw Township, MI Our loving husband, father, brother and uncle passed away at his home on Tuesday, October 8, 2019, following a courageous cancer fight, with his loving family by his side. James Edward Diffin was born on December 14, 1938, in Port Huron, Michigan. He was predeceased by his loving parents, Robert and Marguerite (Keith) Diffin. Jim married Beverlee P. Forbes on December 20, 1974, and she survives him. Jim had served in the United States Army and Navy during the Korean War, and while in the service he was a P.O.W. Prior to his retirement, Jim was a Saginaw County Deputy Sheriff for 25 years. He was a member of Holy Cross Lutheran Church, where he had served on various boards. Jim’s memberships, hobbies and pass-times included the Fraternal Order of Police - Saginaw Law Enforcement, past president of the Pulaski Club, and really enjoyed going up north to spend time with his brothers. Surviving besides his wife, Bev, are their two daughters, Sabrina L. Diffin and Sara J. (Jesse) Cook; his brothers, William Diffin, Richard (Judy) Diffin, Robert Diffin; his in-laws, Judy (Mark) McKellar and David R. (Sue) Forbes; his mother-in-law, Edith A. Forbes; also several nieces, nephews, extended family and dear friends, including special friends, James (Burr) and Dorothy Vedrode. Jim was also predeceased by his brother, Tommy Diffin, and his father-in-law, Robert Forbes. The Celebration of Jim’s Life will be held 12:00 noon on Monday, October 14, 2019, at Holy Cross Lutheran Church, 600 Court St., Saginaw, Michigan. The Rev. James F. Krueger will officiate. In accordance with Jim’s wishes, cremation will follow. Friends are welcome to visit with the family at the Wakeman Funeral Home, 1218 N. Michigan Ave., in Saginaw, on Sunday, October 13, from 2:00 p.m. to 8:00 p.m., and then at the church on Monday, from 11:00 a.m. until the time of Jim’s service. Military Honors will be performed under the auspices of the United States Army and V.F.W. Carrollton Post #1859. Those wishing to express their sympathies are asked to consider memorial contributions to Holy Cross Lutheran Church. Memories and sympathies of Jim may be shared with the family on his memorial website at WakemanFuneralHome.com

DIFFIN, MR. JAMES E. Saginaw Township, MI Our loving husband, father, brother and uncle passed away at his home on Tuesday, October 8, 2019, following a courageous cancer fight, with his loving family by his side. James Edward Diffin was... View Obituary & Service Information

The family of Mr. James E. Diffin created this Life Tributes page to make it easy to share your memories.

Send flowers to the Diffin family.