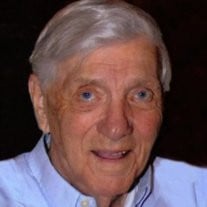 Satchell, Mr. James N. (Satch), Birch Run, Michigan Passed away unexpectedly at home on Friday, March 22, 2013. Age 80 years. Jim was born on December 22, 1932, in Frankenmuth to the late Nelson and Margaret (Korbein) Satchell. He married Bernice Schmunk on January 3, 1981, and she survives him. Jim graduated from Arthur Hill High School in 1950. He then served in the U. S. Navy during the Korean War and was honorably discharged on December 23, 1953. Prior to his retirement, Jim was employed at the Birch Run Grain Elevator for over 20 years. He was a life member of V.F.W. Post #7542 Birch Run, also a member of Eagles #3609 of Clio, and a past member of the Moose Lodge. Surviving besides his wife, Bernice, are his children, Rita, Jimmy, Becky, Trisha, Barry, Wendy, Todd, David and Randy; 16 grandchildren; eight great-grandchildren; his sister, Judy Wakeman; half-sisters, Crystal Hegenaurer and April Olson; several nieces, nephews, and many friends. Jim was predeceased by three daughters, Tina, Pam and Mary; his sister, Beverly Ross, and his brother-in-law, Harold Wakeman. Jim’s funeral service will take place 5:00 p.m. Monday, March 25, 2013, at Wakeman Funeral Home, Inc., 1218 N. Michigan Ave. The Rev. Douglas Kahl will officiate. Private family burial will follow at a later date in Birch Run Township Cemetery with military honor guard conducted under the auspices of V.F.W. Post #7542 Birch Run. Friends are welcome to visit with the family at the Wakeman Funeral Home, Inc. on Monday from 2:00 p.m. until the time of service. Memories and sympathies of Jim may be shared with the family on his memorial website at WakemanFuneralHome.com

The family of Mr. James N. Satchell created this Life Tributes page to make it easy to share your memories.

Send flowers to the Satchell family.