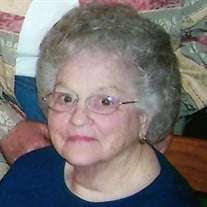 Young-Schmidt, Mrs. Jeanie Margaret, (Bonnie) (Ma) (Aunt B) Saginaw, Michigan Jeanie passed away on Thursday, February 16, 2017, at Covenant – Cooper. Age 86 years. Jeanie Margaret Goodwin was born on November 22, 1930, in Saginaw, daughter of the late James A. and Fannie M. (Lindsay) Goodwin. She was married to Maurice H. Willett and he predeceased her on March 30, 1987. She then was married to George Schmidt on April 15, 2011, in Saginaw. He survives her. Jeanie was a life-long resident of Saginaw, having graduated from Arthur Hill High School in 1948. She was a member of St. Paul’s Ev. Lutheran Church. Prior to her retirement in 1971, Jeanie started out working nights at Michigan Bell during her senior year in high school as a long distance supervisor. She then worked at Second National Bank as a Supervisor-in-Transit at the main office downtown. Many will remember her as a waitress and bartender at the Wolga Club, Washington Society, and as the head night-time bartender in the Barn Bar at Crooked Creek. Jeanie was a caregiver at Luther Manor for ten years. She was an avid reader and loved to crochet. Surviving besides her husband, George, are her son, James P. Willett; her grandson, Wyatt P. Willett; three special nieces, Hilary (Gerald) Levi, Kimberly (Larry) Winters, and Mary (Tom) Lee. Besides her parents and husband, Jeanie was also predeceased by six brothers, John, William, Thomas, Edward, Robert and James, Jr. A special thank-you to Jeanie’s dearest friends, Larry (Kathy) Bronz and Terry Smith who had lovingly taken care of her and saw to her needs the past years. The Celebration of Jeanie’s Life will be held 11:00 a.m. Tuesday, February 21, 2017, at St. Paul’s Lutheran Church 1020 Court & Bond Sts. The Rev. Carl Otto will officiate. Private burial will take place at a later date in Roselawn Memorial Gardens. Friends are welcome to visit with the family at the church on Tuesday from 10:00 a.m. until the time of service. Memorials may be given to St. Paul’s Ev. Lutheran Church or Leader Dogs for the Blind. Memories and sympathies of Jeanie may be shared with the family on her memorial website at WakemanFuneralHome.com

The family of Jeanie M. Young-Schmidt (Bonnie) (Ma) (Aunt B) created this Life Tributes page to make it easy to share your memories.

Send flowers to the Young-Schmidt family.