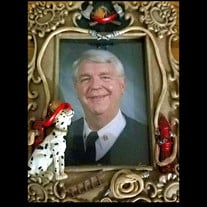 Parrott, Mr. John B. Saginaw, Michigan John passed away following a brief illness on Tuesday, March 27, 2018, at Covenant Medical Center-Cooper. Age 69 years. He was born on February 11, 1949, in Jackson, Michigan, to the late Bruce and Marcella Mae (Klein) Parrott. John served in the U. S. Air Force during the Vietnam War. He was married to Barbara L. Almy on September 11, 1993, in Rochester Hills, Michigan. She survives him. Prior to his retirement, John served as Fire Chief for the Buena Vista Fire Department. His life in fire service began at birth as his father was in the fire service as well. John had worked in the Michigan communities of Kentwood, Three Rivers, Egleston, Cascade Township, and Rochester Hills. He was on numerous boards within the Fire Chiefs Associations. He was an instructor in fire service for Delta College, as well as the University of Michigan. He had many articles published in several fire prevention magazines. He also loved teaching and working with Mobile Medical Response after his fire department days were done. One of his later passions was working with many dog rescue groups in Michigan. He loved his fur babies. John also had a passion for amateur radio and was known to many as W8JP Surviving besides his wife, Barb, are their children, Krystin (Kevin) Rowley, of Melbourne, FL, Amanda Himmelspach and Berry (Jim Showalter), of Waterford, MI, Jocinda (Brian) Hirt, of Lake Orion, MI; grandchildren, Emma, Berry, Quinn, Kasey, and Elliott Hirt, and Meghan, Jenna, Kenneth, Clare, Allison, Jack, and Fulton Rowley. Cremation has taken place. Please save the date of Saturday, September 8, 2018, for the Celebration of John’s Life. The time and place will be announced later. Memories and sympathies of John may be shared with the family on his memorial website at WakemanFuneralHome.com

Parrott, Mr. John B. Saginaw, Michigan John passed away following a brief illness on Tuesday, March 27, 2018, at Covenant Medical Center-Cooper. Age 69 years. He was born on February 11, 1949, in Jackson, Michigan, to the late Bruce and Marcella... View Obituary & Service Information

The family of John B. Parrott created this Life Tributes page to make it easy to share your memories.

Send flowers to the Parrott family.