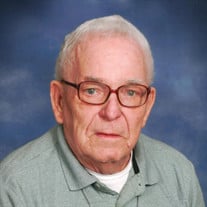 DEXTER, MR. MARVIN E., Saginaw, Michigan Our loving father, grandfather, great-grandfather and brother passed away unexpectedly at his home on Thursday, March 24, 2016. Age 85 years. Marvin Edwin Dexter was born on October 3, 1930, in Muskegon, MI, to the late Curtis J. and Linda M. (Spitz) Dexter. He married Lorraine Nettie (Rena) Cholcher on June 20, 1953, and after 50 years of marriage, Lorraine predeceased him on September 30, 2003. Prior to his retirement in 1983, Marvin was employed as a millwright at General Motors for 30 years. He also had worked for over 40 years on local golf courses and was an avid bowler. He also enjoyed coaching young kids bowling. Marvin was a long-time member of Holy Cross Ev. Lutheran Church, where he had served on various boards. Surviving are his three children and their spouses, Debra (Glenn) Harper; Randall (Patricia) Dexter, and Marci Short, all of Saginaw; six grandchildren, Kali (John) Bagley, Max, and Kelsey Harper; Erica (Scott) Ostrom; Amber and Sean Short Jr.; five great-grandchildren and one on the way; two brothers and their spouses, Gerald (Joanne) Dexter and Ronald (Shirley) Dexter; sister-in-law, Arlene Cholcher; also several nieces and nephews. Marvin was predeceased by his parents, wife, and a grandson, Derrick Short. Marvin’s funeral service will take place 11:00 a.m., Friday, April 1, 2016, at Holy Cross Ev. Lutheran Church, 600 Court St., Saginaw. The Rev. James F. Krueger will officiate with burial in Eastlawn Memorial Gardens. Friends are welcome to visit with the family at the Wakeman Funeral Home, Inc., 1218 N. Michigan Ave., Saginaw, on Thursday from 2:00 to 8:00 p.m., then at the church on Friday from 10:00 a.m. until the time of his service. Memorial contributions may be given to Holy Cross Ev. Lutheran Church or Michigan Parkinson Foundation. Memories and sympathies of Marvin may be shared with the family on his memorial website at WakemanFuneralHome.com

The family of Marvin E. Dexter created this Life Tributes page to make it easy to share your memories.

Send flowers to the Dexter family.