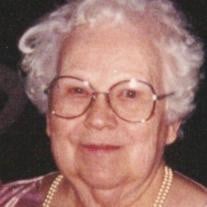 Goold, Mrs. Meriam I. (Broderick), a former resident of Saginaw, Michigan passed away Sunday, September 4, 2011, at Bortz Health Care in Rose City, MI. Age 97 years. Meriam I. Broderick was born on August 8, 1914, in Akron, MI, to the late Owen and Saloma (Fullmer) Broderick. She was married to Ernest W. Goold on March 7, 1937, in Bay City, MI. After 66 years of marriage, he predeceased her on December 5, 2003. Prior to her retirement, Meriam worked as the bookkeeper for her husband, who owned and operated the E. W. Goold Construction Co. from 1945 to 1979. She had volunteered as a Sunday School teacher for over 50 years at the Swan Valley Church of the Nazarene. Surviving are one daughter and one son, and their spouses, Marylin (Leo) Barnekow, Saginaw; Ernest (Sandy) Goold, Beaverton; son-in-law, Douglas (Beverly) Lange, Hale; 11 grandchildren; 20 great-grandchildren; 18 great-great-grandchildren; two sisters, Muriel Hayward, Bay City; June Wescoat, Caro; and one brother, William T. Broderick, GA; also many nieces and nephews. She was also predeceased by her daughter, Delores Lange, and two sisters, Helma Kintner and Fern Brown. Funeral and committal services will take place at 11:00 a.m. Friday, September 9, 2011, at the Wakeman Funeral Home, Inc., 1218 N. Michigan Ave. The Rev. Jerry Schalau will officiate. Burial will follow later in Roselawn Memorial Gardens. Friends are welcome to visit with the family at the Wakeman Funeral Home, Inc. on Thursday from 2:00 to 8:00 p.m., then on Friday from 10:00 a.m. until the time of services. Memorial contributions may be given to Swan Valley Church of the Nazarene. Memories and sympathies of Meriam may be shared with the family on her Obituary page at WakemanFuneralHome.com

The family of Mrs. Meriam I. (Boderick) Goold created this Life Tributes page to make it easy to share your memories.

Goold, Mrs. Meriam I. (Broderick), a former resident of Saginaw,...

Send flowers to the Goold family.