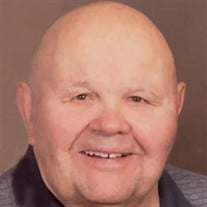 KROGMAN, MR. NORMAN A. SWAN CREEK TWP., SAGINAW, MI Loving husband, father, brother, and grandfather passed away unexpectedly on Friday, May 6, 2022, at his home, at the age of 81 years. Norman was born on January 4, 1941, in Saginaw, Michigan to the late Howard and Mary (Rilko) Krogman. Norm was married to Joyce (Clauss) Krogman on March 22, 1969 in Saginaw, Michigan. Joyce survives him. He is also survived by his children, Todd Clauss and Brenda (Jeff) Crook. Grandchildren, Adam Clauss, Larissa Crook and Jacob Crook. His siblings, Robert (Marilyn) Krogman, James (Phil-Anne) Krogman, Debra Engers, Barbara (Hassan) Movahhed, and John (Patricia) Krogman. He is also survived by many special nephews, nieces, great-nephews, and great-nieces. He was predeceased by his parents, Howard and Mary Krogman, sister, Karen (Krogman) Weadock, and brother-in-law, Egon Engers. Norm served in the U.S. Navy from 1958-1964. He was employed at Helfrecht Machine, Bay City Boring, Merrill Tool, K.C. Engineering, and he retired from Debut Automotive in 2001. He was a member of St. Mark Lutheran Church in Shields. Norm attended Arthur Hill High School and was a member of the AHHS Letterwinners Association. Norm participated in softball, baseball, bowling, golf, and was an outstanding swimmer at Arthur Hill High School. He enjoyed all sports, spending time with his family and friends, and was a die-hard Michigan State University fan and was a season football ticket holder for many years. Norm was also a participant of the Wednesday morning Beech Hollow senior golf league for many years. Visitation will be held at St. Mark Lutheran Church, 2565 Miller Road in Shields, on Thursday, May 12th from 4:00 p.m. to 8:00 p.m. The funeral service will follow on Friday, May 13, 2022, at 11:00 a.m. at Church, with visitation from 10:00 a.m. until the time of service. The Rev. Kirk Abatelli will officiate. Norm will then be laid to rest in Oakwood Cemetery, Saginaw Twp., MI. Memorial contributions may be given to St. Mark Lutheran Church or St. Jude’s Children’s Hospital. Memories and sympathies of Norm may be shared with the family on his memorial website at WakemanFuneralHome.com.

KROGMAN, MR. NORMAN A. SWAN CREEK TWP., SAGINAW, MI Loving husband, father, brother, and grandfather passed away unexpectedly on Friday, May 6, 2022, at his home, at the age of 81 years. Norman was born on January 4, 1941, in Saginaw, Michigan... View Obituary & Service Information

The family of Norman A. Krogman created this Life Tributes page to make it easy to share your memories.

Send flowers to the Krogman family.