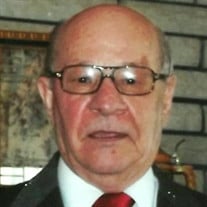 Popp, Mr. Richard H. (Dick), Saginaw, Michigan Richard passed away peacefully Friday, November 20, 2020, at Covenant Medical Center – Harrison, at the age of 85 years. Richard Harold Popp was born on March 8, 1935, in Bridgeport, Michigan, to the late William J. and Elsie A. (Butzin) Popp. He was married to Yvonne A. (Kusch) Popp on November 6, 1954, in Bridgeport, and she predeceased him on February 8, 2007. Years after Yvonne’s passing, Richard reconnected with his high school sweetheart, Loretta (Lori) Prentice, they spent his remaining years happily enjoying life. Richard enjoyed the outdoors, cooking and several activities. He was an avid bowler, who participated in multiple leagues. He was Past Master and a 60 year member of Bridgeport Masonic Lodge #258. He especially enjoyed cooking for their corn beef dinners and the company of his friends. Prior to his retirement in 1997, Richard was employed as a production supervisor at General Motors for 36 years. Surviving are his daughter, Virginia Campbell, Saginaw; his granddaughter, Kelly (Mitch) Clark; great grandsons; Dakota and Maxwell Clark; grandsons Jeffrey Cox and Benjamin (Krissy) Cox; special friends, John and Jean Cummings of Hemlock and several nieces, nephews, cousins, extended family members and dear friends. Richard was also predeceased by his daughter, Kathryn Cox; his son, Rick Popp; his grandson, Adam Campbell; his brother, Ronald Popp and his sister, Jean Morrison. Due to the on-going health crisis, distancing is requested and masks are required. Richard’s committal service will be held at 1:00pm on Monday, November 30, 2020, at graveside in Roselawn Memorial Gardens, Saginaw Twp., Michigan. The Rev. Charles F. Buckhahn will officiate. Memorial contributions may be given to the Bridgeport Masonic Lodge #258, 6186 Dixie Hwy, Bridgeport, MI 48722. Memories and sympathies of Dick may be shared with the family on his memorial website at WakemanFuneralHome.com

The family of Richard H. Popp created this Life Tributes page to make it easy to share your memories.

Send flowers to the Popp family.