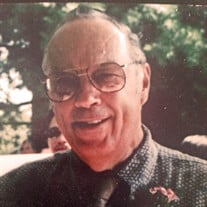 Braman, Mr. Robert E., Saginaw, Michigan Passed away unexpectedly at his home on Sunday, May 25, 2014. Age 80 years. Bob was born on January 20, 1934, in Saginaw, to the late Clyde and Ivy (Glover) Braman. He served in the U.S. Army during the Korean War, and was a member of and volunteered for duty on the Honor Guard for American Legion Post 22 and was also a member of the VFW. He was married to Mary E. (Betty) Blackwell on June 27, 1959, in Bay City. She predeceased him on October 14, 2010. Bob had worked as the bookkeeper for the Saginaw Institute for the Blind for 10 years and prior to his retirement in 1997, Bob was employed as an accountant/bookkeeper at GM for 30 years. He enjoyed bowling over the years on numerous leagues, also fishing and was a big fan of the Tigers and Red Wings. He is survived by four children, Robert E. Braman, Jr.; Donald (Michele) Braman; Kimberly (Paul) Newman; Thomas (Lynn) Braman; five grandchildren, Zachary and Kayla Newman; Krystle, Cherish, and Ciara Braman; one great-grandson, Collin; his brothers, Clyde (Phyllis) Braman, Jr., Jim (Michelle) Braman, Mike Braman, and his sister, Debbie Eshenbacher. He was predeceased by his sister, Joanne Husen. Bob will be forever remembered for his LOUD whistling. The celebration of Bob’s life will be held 11:00 a.m. Friday, May 30, 2014, at the Wakeman Funeral Home, Inc., 1218 N. Michigan Ave. Pastor Larry Osweiler will officiate with entombment in Roselawn Memorial Gardens Mausoleum with military honor guard conducted under the auspices of American Legion Post 22. Friends are welcome to visit with the family on Thursday from 2:00 to 8:00 p.m., then on Friday from 10:00 a.m. until the time of his service. Memorial contributions may be given to the Saginaw County Commission on Aging for the West Side Saginaw Friendship Senior Center. Memories and sympathies of Bob may be shared with the family on his Obituary page at WakemanFuneralHome.com ---------------------------------------------------------------------------------------------------------------------------- Family and friends traveling to Saginaw: If you are in need of accommodations, we have developed a list of recommended hotels. Each hotel has been personally inspected by us and management has offered a special bereavement rate. We recommend contacting the hotel of your choice directly to receive the bereavement rate. The information is available on the 'Local Info & Resources' page of our website at http://www.wakemanfuneralhome.com/local-info-and-resources/local-information.

Braman, Mr. Robert E., Saginaw, Michigan Passed away unexpectedly at his home on Sunday, May 25, 2014. Age 80 years. Bob was born on January 20, 1934, in Saginaw, to the late Clyde and Ivy (Glover) Braman. He served in the U.S. Army during... View Obituary & Service Information

The family of Mr. Robert E. Braman created this Life Tributes page to make it easy to share your memories.

Send flowers to the Braman family.