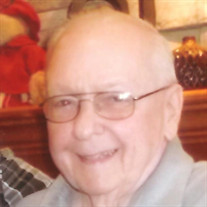 Pohlman, Mr. Robert C. Bad Axe, Michigan Robert Charles Pohlman, formerly of Oscoda, MI, passed away peacefully at Meadow Lane Assisted Living in Bad Axe, MI, on Sunday, May 13, 2018, at the age of 85 years. Bob was born on June 6, 1932, in Saginaw, to the late Charles and Katherine (Eisenach) Pohlman. On February 17, 1956, he married Louise Florence Wazny, who predeceased him on October 6, 2015. Robert graduated from Arthur Hill High School in 1950. He entered the United States Coast Guard in August of 1951, and was honorably discharged in August of 1954, having served during the Korean War. When Bob arrived back home, he enrolled at Michigan State and graduated with a degree in business. In January of 1961, he started working for the State Farm Insurance Company. After a long, successful career, he retired as Senior Claim Automation and Procedure Specialist in 1994. Bob enjoyed spending time with his family and friends, boating, puttering around the house, reading, listening to music and spending time on his computer. Bob is survived by his two children and their spouses, Deborah (Robert) McLean, Robert (Ann) Pohlman, Jr.; one special grandson, Joseph Michael Pohlman; one sister, Jean Thon; two brothers-in-law, Kenneth (Kay) Wazny, Gerald (Rita) Wazny; two sisters-in-law, Delphine Truckle and Shirley (Martin) Knowlton; several nieces, nephews, extended family and friends. Bob was preceded in death by his wife of 59 years, Louise, his brother, Paul Pohlman, his father-in-law and mother-in-law, Michael and Florence (Purman) Wazny, sister-in-law, Marcia Wazny, and two brothers-in-law, Lloyd Truckle and Clarence Wazny. Mr. Pohlman’s funeral service will take place 12:00 noon, Wednesday, May 16, 2018, at Holy Cross Ev. Lutheran Church, 600 Court St., Saginaw. The Rev. James F. Krueger will officiate. In accordance with Bob’s wishes, cremation will take place following his service, and his inurnment will be at a later date in Chapel Hill Mausoleum in Freeland. Friends are welcome to visit with the family at the church on Wednesday from 10:00 a.m. until the time of his service. Memorials may be given to the American Diabetes Association. Memories and sympathies of Bob may be shared with the family on his memorial website at WakemanFuneralHome.com

The family of Mr. Robert C. Pohlman created this Life Tributes page to make it easy to share your memories.

Send flowers to the Pohlman family.