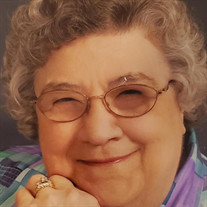 Stevens, Vernita F. Bridgeport Twp., Michigan Vernita passed away on Monday, April 27, 2020, at the age of 86 years. Vernita F. (Cramer) Stevens was born on December 18, 1933, in Kilmanagh, Michigan, daughter to the late, Norman and Elvina (Wachner) Cramer. She was married to Lyle Robert Stevens on November 11, 1966, and after 35 years of marriage, Lyle predeceased her on April 5, 1999. Vernita is survived by her sisters and brother, Walter Cramer, Gloria Kaake and Onalee Mueller; step-son, Ronald (Sandy) Stevens; several nieces and nephews, extended family members and dear friends. She was also predeceased by her brother and sisters, Robert Cramer, Danny Cramer, Eldine Charlotte Cramer, Norma (Cramer) DieFenbach and Laura (Wachner) Bechler. Prior to her retirement, Vernita was employed in bookkeeping in the food retail industry. Vernita was a member of Faith Ev. Lutheran Church on Mackinaw Road in Saginaw Twp., Michigan. Due to the current health issues and group gathering limitations, Vernita will be laid to rest, next to her husband, Lyle, in Roselawn Memorial Gardens in Saginaw Township. The memorial celebration for Vernita will be held at a future date. Those wishing to express their love and sympathies are asked to consider memorial contributions to Faith Ev. Lutheran Church or ASPCA in loving memory of Vernita. Memories and sympathies of Vernita may be shared with the family on her memorial website at WakemanFuneralHome.com

The family of Vernita F. Stevens created this Life Tributes page to make it easy to share your memories.

Send flowers to the Stevens family.