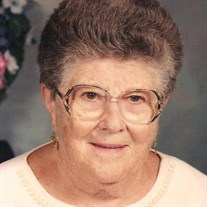 BINGHAM, MRS. WINNIFRED G., LaBelle, Florida Formerly of Saginaw, Michigan, Winnifred was called home to her Lord on Monday, August 24, 2020, while in the care of Oakbrook Health & Rehab in LaBelle, Florida, at the age of 102 years. Winnifred Grace (Vance) Bingham was born on November 5, 1917, in Frankenmuth Twp., to the late Fred G. and Myrtle G. (Newbold) Vance. She was married to Clarence G. Brown on October 6, 1939, and he predeceased her in 1980, she then was married to Lionel Bingham on June 30, 1962, and he predeceased her on March 17, 1972. Prior to her retirement, Winnifred had been employed at J. C. Penny’s and at Weichmann’s, in charge of the Girl Scout Dept., and as a sales clerk. She also volunteered at the V.A. Hospital, HealthSource, and for the Cystic Fibrosis Association. She had been a member of 2nd Presbyterian Church in Saginaw Twp. Surviving are three children and their spouses, Gerald (Carol) Brown, Standish, Michigan; Barbara Green, LaBelle, Florida; Carol (Andrew) Smith, Saginaw, Michigan; 7 grandchildren; 10 great-grandchildren; her sisters-in-law, Sue Vance and Betty Vance; also many nieces and nephews; her step-son, Lionel Bingham. She was also predeceased by her granddaughter, Nikki Husack; her grandson, Scott Brown, her great-granddaughter, Emily Plummer; her brothers, Richard, Wilber, Robert, George and David Vance; her sister, Beatrice Sweeney; son-in-law, Richard Green; and step-sons, Lloyd and Marc Bingham. Winnifred’s memorial committal will be held at 11:00 a.m. on Saturday, September 26, 2020, in Pinegrove Cemetery, Bridgeport Twp., Michigan. The Rev. Philomena Ofori-Nipaah will officiate. Due to the on-going health crisis and group gathering limitations, cremation has taken place, distancing and lawn chairs are suggested and masks are requested. Memorial contributions may be given to the Cystic Fibrosis Foundation 6931 Arlington Rd Ste. 2, Bethesda, MD 20814. Memories and sympathies of Winnifred may be shared with the family on her memorial website at WakemanFuneralHome.com

BINGHAM, MRS. WINNIFRED G., LaBelle, Florida Formerly of Saginaw, Michigan, Winnifred was called home to her Lord on Monday, August 24, 2020, while in the care of Oakbrook Health & Rehab in LaBelle, Florida, at the age of 102 years. Winnifred... View Obituary & Service Information

The family of Mrs. Winnifred G. Bingham created this Life Tributes page to make it easy to share your memories.

Send flowers to the Bingham family.